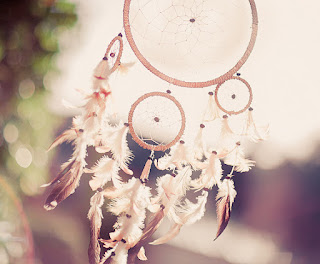 Me:  You were really mean to me in my dream last night.

Daniel:  That's crazy.  I can't help what you dream about.

Me:  I know!  But that doesn't mean I feel any less angry.

Over the years we were married, variations of this conversation took place on several occasions.  I'd wake up from a vivid dream and inform him of my state of mind.  He'd take it in good-naturedly although I did not always get sweet, salty treats to make amends for his dream actions.  Depending on his mood, he might wink and suggest we kiss and make up or pat me on the head and tell me to get back to him when I was over it.

I remember distinctly thinking, when Daniel died, that at least I would get to see him in my dreams.  I made fantastical plans to spend as much time as possible asleep so that I could still talk with him.  It's been almost a year now, and I have yet to have one single dream of Daniel.

For the first several months, I could not remember dreaming at all.  This crazy thought came into my mind that we were, in fact, really talking together in my sleep, and that for some reason to keep the magic working properly, I must be made to forget the encounter upon waking.

Later, when I started to dream again (or remember what I was dreaming) I expected to see him star in them once more.  Even to hear his voice or see his smile in my sleeping visions would be better than a complete absence.  But the place where he should be remains stubbornly empty.

When Daniel was planning our wedding, he insisted that we get married in our pajamas because he said that our life together would be a dream come true.  In typical Daniel fashion, he was right.  I guess I will just keep dreaming of the being able to see him again, even if it's only behind closed eyes.

I love you Daniel.

Daniel Eric Willard came into my life on June 6, 2001 and made every following day amazing. I was so lucky to have 13 1/2 wonderful years with him before I had to say goodbye to my best friend on January 13, 2015.
Our life was like a finely choreographed dance. We were so in sync that we could predict what the other was thinking and finished each other's sentences.
I knew so well how to be Daniel's girl. I'm still learning how to be Daniel's widow.